Ryan is the family’s good luck charm, just like a clover, and has been since he found his first four leaf clover back when he was around 8 years old. His four-leaf clover collection quickly escalated to a whopping 84 before he was even 10. He quickly became famous to our family for his amazing luck and his growing collection. 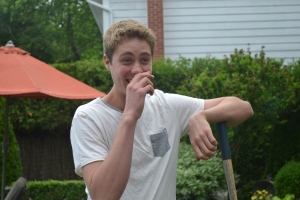 Ryan is the family’s #1 athlete – succeeding at pretty much every sport he’s tried (and he’s tried a lot). He started off with soccer and hockey when he was young, but stopped both after he became interested in baseball. The whole family used to attend Ryan’s baseball games, yelling at the umpire when they wrongly called Ryan’s pitch a “ball” and cheering as he hit the ball out of the park (at least once a game).

When Ryan started watching hockey on t.v., he decided to give hockey another go – this time as goalie. Despite his 6 foot tall frame, he was able to succeed (yet again) at hockey.

Ryan’s “nanny” has always bragged about his strong imagination and his athleticism. Although she never understood what was happening in his games, or why you couldn’t “travel” with a basketball, she was always proud of his hard work in his sports.

When Ryan was younger, he spent a lot of time in nanny’s garden. He used to help her water the plants and loved to dig for bugs in the dirt! His nanny always laughed at his curiosity and fascination with all sorts of bugs.

My favourite memory from Grandma’s garden was “feeding the koi fish in the pond when she moved to Dundas”.

We are a Grandma & Granddaughter duo with a blog focusing on gardening tips, recipes, restaurant & garden reviews, natural healing, essential oils and more!